So this is how it works 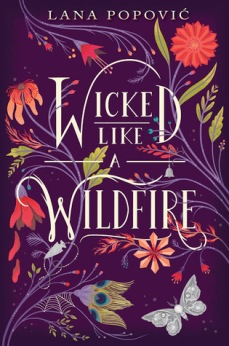 ‘Wicked like a Wildfire’ By Lana Popovic
All the women in Iris and Malina’s family have the unique magical ability or “gleam” to manipulate beauty. Iris sees flowers as fractals and turns her kaleidoscope visions into glasswork, while Malina interprets moods as music. But their mother has strict rules to keep their gifts a secret, even in their secluded sea-side town. Iris and Malina are not allowed to share their magic with anyone, and above all, they are forbidden from falling in love.
But when their mother is mysteriously attacked, the sisters will have to unearth the truth behind the quiet lives their mother has built for them. They will discover a wicked curse that haunts their family line—but will they find that the very magic that bonds them together is destined to tear them apart forever?

Definitely a KEEP. I know you shouldn’t judge a book by its cover… BUT this cover is amazing!

‘Zenith’ By Sasha Alsberg and Lindsey Cummings
All the women in Iris and Malina’s family have the unique magical ability or “gleam” to manipulate beauty. Iris sees flowers as fractals and turns her kaleidoscope visions into glasswork, while Malina interprets moods as music. But their mother has strict rules to keep their gifts a secret, even in their secluded sea-side town. Iris and Malina are not allowed to share their magic with anyone, and above all, they are forbidden from falling in love.
But when their mother is mysteriously attacked, the sisters will have to unearth the truth behind the quiet lives their mother has built for them. They will discover a wicked curse that haunts their family line—but will they find that the very magic that bonds them together is destined to tear them apart forever?

This is one I want to KEEP. There have been very mixed reviews about it but I want to see for myself. 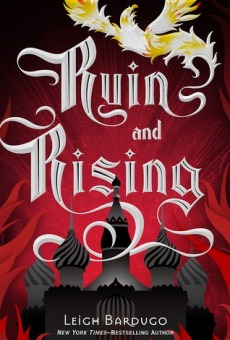 ‘Ruin and Rising’ By Leigh Bardugo
The Darkling rules Ravka from his shadow throne.
Now the nation’s fate rests with a broken Sun Summoner, a disgraced tracker, and the shattered remnants of a once-great magical army.
Deep in an ancient network of tunnels and caverns, a weakened Alina must submit to the dubious protection of the Apparat and the zealots who worship her as a Saint. Yet her plans lie elsewhere, with the hunt for the elusive firebird and the hope that an outlaw prince still survives.
Alina will have to forge new alliances and put aside old rivalries as she and Mal race to find the last of Morozova’s amplifiers. But as she begins to unravel the Darkling’s secrets, she reveals a past that will forever alter her understanding of the bond they share and the power she wields. The firebird is the one thing that stands between Ravka and destruction—and claiming it could cost Alina the very future she’s fighting for.

I’ve already purchased the trilogy so I definitely want to get to it at some point. KEEP. 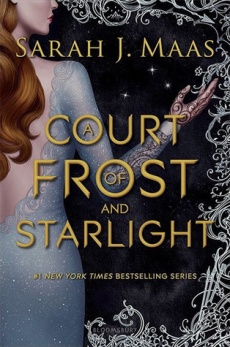 ‘A Court of Frost and Starlight’ By Sarah J. Mass
The Winter Solstice. In a week. I was still new enough to being High Lady that I had no idea what my formal role was to be. If we’d have a High Priestess do some odious ceremony, as lanthe had done the year before. A year. Gods, nearly a year since Rhys had called in his bargain, desperate to get me away from the poison of the Spring Court to save me from my despair. Had he been only a minute later, the Mother knew what would have happened. Where I’d now be. Snow swirled and eddied in the garden, catching in the brown fibres of the burlap covering the shrubs My mate who had worked so hard and so selflessly, all without hope that I would ever be with him We had both fought for that love, bled for it. Rhys had died for it.

I’ve pre ordered this book because I am so excited to continue with this series. KEEP!

‘Ink, Iron and Glass’ By Gwendolyn Clare
Can she write a world gone wrong?
A certain pen, a certain book, and a certain person can craft entirely new worlds through a branch of science called scriptology. Elsa comes from one such world that was written into creation, where her mother―a noted scriptologist―constantly alters and expands their reality.
But when her home is attacked and her mother kidnapped, Elsa is forced to cross into the real world and use her own scriptology gifts to find her. In an alternative Victorian Italy, Elsa finds a secret society of young scientists with a gift for mechanics, alchemy, or scriptology―and meets Leo, a gorgeous mechanist with a smart mouth and tragic past. She recruits the help of these fellow geniuses just as an assassin arrives on their doorstep.
In this thrilling debut, worlds collide as Elsa unveils a deep political conspiracy seeking to unlock the most dangerous weapon ever created―and only she can stop it.

I love the idea of a scriptologist and the synopsis sounds amazing. Definitely a KEEP. 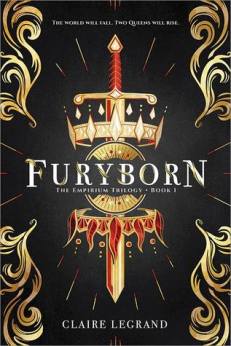 ‘Furyborn’ By Claire Legrand
assassins ambush her best friend, the crown prince, Rielle Dardenne risks everything to save him, exposing her ability to perform all seven kinds of elemental magic. The only people who should possess this extraordinary power are a pair of prophesied queens: a queen of light and salvation and a queen of blood and destruction. To prove she is the Sun Queen, Rielle must endure seven trials to test her magic. If she fails, she will be executed…unless the trials kill her first.
A thousand years later, the legend of Queen Rielle is a mere fairy tale to bounty hunter Eliana Ferracora. When the Undying Empire conquered her kingdom, she embraced violence to keep her family alive. Now, she believes herself untouchable–until her mother vanishes without a trace, along with countless other women in their city. To find her, Eliana joins a rebel captain on a dangerous mission and discovers that the evil at the heart of the empire is more terrible than she ever imagined.
As Rielle and Eliana fight in a cosmic war that spans millennia, their stories intersect, and the shocking connections between them ultimately determine the fate of their world–and of each other.

This one I have been anticipating, even though it hasn’t even been released yet! KEEP.

‘The Iron King’ By Julie Kawaga
Something has always felt slightly off in Meghan’s life, ever since her father disappeared before her eyes when she was six. She has never quite fit in at school or at home.
When a dark stranger begins watching her from afar, and her prankster best friend becomes strangely protective of her, Meghan senses that everything she’s known is about to change.
But she could never have guessed the truth – that she is the daughter of a mythical faery king and is a pawn in a deadly war. Now Meghan will learn just how far she’ll go to save someone she cares about, to stop a mysterious evil, no faery creature dare face; and to find love with a young prince who might rather see her dead than let her touch his icy heart.

This one might need to be a DELETE. I only added it more recently but I’m already not as into the synopsis ans I was before. 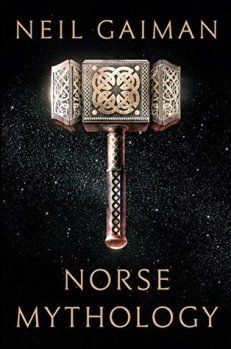 ‘Norse Mythology’ By Neil Gaiman
Neil Gaiman has long been inspired by ancient mythology in creating the fantastical realms of his fiction. Now he turns his attention back to the source, presenting a bravura rendition of the great northern tales. In Norse Mythology, Gaiman fashions primeval stories into a novelistic arc that begins with the genesis of the legendary nine worlds; delves into the exploits of the deities, dwarves, and giants; and culminates in Ragnarok, the twilight of the gods and the rebirth of a new time and people. Gaiman stays true to the myths while vividly reincarnating Odin, the highest of the high, wise, daring, and cunning; Thor, Odin’s son, incredibly strong yet not the wisest of gods; and Loki, the son of giants, a trickster and unsurpassable manipulator. From Gaiman’s deft and witty prose emerges the gods with their fiercely competitive natures, their susceptibility to being duped and to dupe others, and their tendency to let passion ignite their actions, making these long-ago myths breathe pungent life again.

This is one that I’ve already started reading. KEEP.

‘Wild Beauty’ By Anne -Marie McLemore
Love grows such strange things.
For nearly a century, the Nomeolvides women have tended the grounds of La Pradera, the lush estate gardens that enchant guests from around the world. They’ve also hidden a tragic legacy: if they fall in love too deeply, their lovers vanish. But then, after generations of vanishings, a strange boy appears in the gardens.
The boy is a mystery to Estrella, the Nomeolvides girl who finds him, and to her family, but he’s even more a mystery to himself; he knows nothing more about who he is or where he came from than his first name. As Estrella tries to help Fel piece together his unknown past, La Pradera leads them to secrets as dangerous as they are magical in this stunning exploration of love, loss, and family.

This is one I want to buy and read so badly. I love the idea of everything stemming from a garden. KEEP. 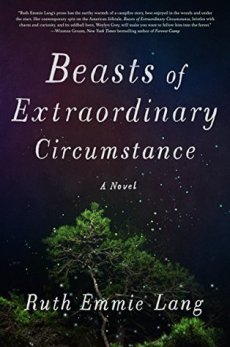 ‘Beasts of Extraordinary Circumstance’ By Ruth Emmie Lang
Orphaned, raised by wolves, and the proud owner of a horned pig named Merlin, Weylyn Grey knew he wasn’t like other people. But when he single-handedly stopped that tornado on a stormy Christmas day in Oklahoma, he realized just how different he actually was.
That tornado was the first of many strange events that seem to follow Weylyn from town to town, although he doesn’t like to take credit. As amazing as these powers may appear, they tend to manifest themselves at inopportune times and places. From freak storms to trees that appear to grow over night, Weylyn’s unique abilities are a curiosity at best and at worst, a danger to himself and the woman he loves. But Mary doesn’t care. Since Weylyn saved her from an angry wolf on her eleventh birthday, she’s known that a relationship with him isn’t without its risks, but as anyone who’s met Weylyn will tell you, once he wanders into your life, you’ll wish he’d never leave.
Beasts of Extraordinary Circumstance tells the story of Weylyn Grey’s life from the perspectives of the people who knew him, loved him, and even a few who thought he was just plain weird. Although he doesn’t stay in any of their lives for long, he leaves each of them with a story to tell. Stories about a boy who lives with wolves, great storms that evaporate into thin air, fireflies that make phosphorescent honey, and a house filled with spider webs and the strange man who inhabits it.
There is one story, however, that Weylyn wishes he could change: his own. But first he has to muster enough courage to knock on Mary’s front door.
In this warm debut novel, Ruth Emmie Lang teaches us about adventure and love in a beautifully written story full of nature and wonder.

I recently purchased this one.. (see March: Book Haul) and it is definitely one I am keen to read. KEEP.

Let me know what books you are excited to read!

27. Melbourne. Love to read and go on adventures. Goodreads: https://www.goodreads.com/user/show/74444706-kate View all posts by harpergraeblog